In The illusive home, James R. Mitchener gives us a very personal insight into the life of a real Third Culture Kid. He has first hand knowledge of what global moving and a life spent in different cultures means for TCK’s who are “cultural mixing pots, have grown up in so many vastly different worlds that the country from which we hail has no meaning beyond the fact that it’s the place that our passport says we belong” (p.1)

He talks about what “home”  means for a TCK, who “adopts fragments of every culture” and make them his own.

James R. Mitchell highlightens the important and sometimes painful aspects of transitioning for TCK’s, based on his own experiences. He describes the huge adaptability and mobility of TCK’s, their “ability to have an incredibly detailed understanding of new and unique cultures” (p.16) and why adaptation is their “most desirable quality” (p.17), that makes them into “creatures of culture” (p.18).

He also discusses why the definition of TCK should be more diversified because of many different kinds of TCK’s existing nowadays.

If you are a TCK, a parent of a TCK or an ATCK, The Illusive Home will resonate to you.

Growing up as a Third Culture Kid can be terrifying, but it is also rewarding and exciting: “In my eyes, despite how broken parts of my life have become, being raised in the places I’ve lived and having taken in so many cultures is the single greatest thing that has ever happened to me” (p.13). 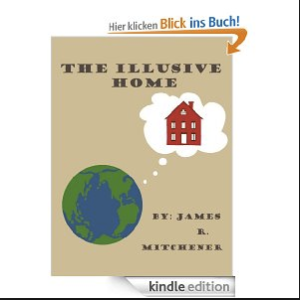 A few days ago, James R. Mitchener did publish a great post about the definition of TCK’s, called “Defining a Third Culture Kid” on his site “Third Culture Kid Life“: a must read for every TCK!

FYI: The common definition by David C. Pollock of a “Third Culture Kid”:

A Third Culture Kid (TCK) is a person who has spent a significant part of his or her developmental years outside the parents’ culture. The TCK frequently builds relationships to all of the cultures, while not having full ownership in any. Although elements from each culture may be assimilated into the TCK’s life experience, the sense of belonging is in relationship to others of similar background. (David C. Pollock)