A spring celebration in Switzerland: Sechseläuten

Sechseläuten (Sächsilüüte) is a spring holiday in Zurich, Switzerland, celebrated on the 3rd Monday of April since the early 20th century. After a parade of the guilds (Zünfte), everyone gathers around the Sechseläutenplatz (Bellevueplatz) in Zurich to burn the Winter. The Winter is symbolized in form of a Böögg, the figure of a snowman, stiffed with explosives. 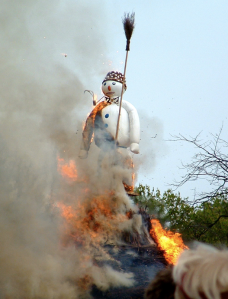 The Böögg is the German term for bogey and is in origin a scary-looking ragdoll. We can find this tradition in many places, not only in Switzerland. The Böögg was a masked character doing mischief and frightening children during the carnival season. Originally, the burning of the Böögg in Spring was not directly connected to the Sechseläuten.

Sechseläuten has his roots in the medieval times, when the first day of summer working hours was celebrated in the guidhalls (Zunfthäuser) across the city. Back then, city ordinances regulated the length of the working day and during the winter semester the workday lasted as long as there was daylight. The summer semester started on the first Monday following the vernal equinox and “the law proclaimed that work must cease when the church bells tolled at six o’clock (6 p.m.) the time of sunset on vernal equinox”. – This is where the name “Sechseläuten” comes from: the six o’clock ringing of the bells. The bells are those of the Fraumünster. This change to summer working hours was a joyous occasion because it marked the beginning of the season where people had some non-working daylight hours.

Only since 1902 Sechseläuten and the burning of the Böögg are combined in one celebration. From 1902 until 1951, Sechseläuten was held on the first Monday after the vernal equinox, but since 1952 it is held on the third Monday of April and because of the summer time introduced in Switzerland in 1981, the lighting of the Böögg’s pyre has moved to several hours before nightfall.

The same day takes place a very colorful afternoon parade of the 26 guilds in their historic dress costumes. Each has his own band and most with a mounted “Reitergruppe” and horse drawn floats. They all arrive at the Sechseläutenplatz (Bellevue place) where the Böögg is burned. Several mounted units of the guilds will gallop three times around the Böögg.

The time between the lighting of the pyre and the explosion of the Böögg’s head indicates how the coming summer will be: a quick explosion promises a warm, sunny summer, a drawn-out burning a cold and rainy one.

“The shortest time on record is 5:07 minutes in 1974, and the longest in 2001 with 26:23. The 2007 explosion of the Böögg`s head (on 16 April 2007) took place 12:09 minutes after the pyre was lit, promising a medium warm summer. On 14 April 2008, heavy rains soaked the Böögg and the wood pyre materials so much that “firemen” (…) had to spray the pyre with kerosene or fuel oil after initial ignition in addition to 15 liters of fire accelerant which was initially thrown on the pyre. It took 26:01 minutes for the Bööggs head to explode which indicates a poor weather summer.” [cfr. wikipedia]

This rather late explosion promised a very poor summer and the fact that the head burned down very quietly instead of exploding, caused a lot of confusion. In 2012, it took the Böögg 12 minutes and 07 seconds to explode.

Unfortunately, Sechseläuten is a very sexist tradition since 1952: No women are allowed to participate in the parade of the guilds. Fact is, that in the 19th Century engarlanded girls, called Mareili, processed through the city whilst the boys carried the straw man that was going to be burnt. Therefore, objecting that the participation of women in the parade is against the tradition, is wrong.

Only in 2011 (!) a women’s guild “Gesellschaft zu Fraumünster” was allowed to participate. This was celebrated by the media as a very emancipatory sign (see for example this article). But very soon, the men of the other guilds did vote against women’s guilds at the Sechseläuten Parade, so we’re back in 1952… No women’s guild is allowed to the Parade at Sechseläuten this year. – As described by Evelyne in her post “Das Zürcher Sechseläuten – ein zutiefst sexistischer Brauch“, this fact is highly discriminating and embarassing for a city like Zurich in the 21rst Century…