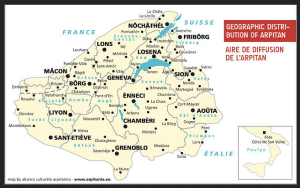 The Suisse romande or Romandie is the French speaking part of western Switzerland. It inlcudes the cantons of Fribourg, Geneva, Jura, Neuchâtel, western Valais, Vaud and the northern part of Berne (cfr. Jura Bernois or the Bernese Jura).

People in the Romandie speak the Suisse romand, a variety of French, not to be confused with the Franco-Provençal/Arpitan (also spoken in this region) or Rumantsch (spoken in the Grisons).

The Romandie doesn’t have one standardized Swiss French language: every canton uses a different vocabulary, mainly derived from the local regional language or even from German.

Here are a few examples about how the French of the Romandie differs from the standard French:

Some distinctive lexical features, that the Suisse Romand shares with the Belgian French are the use of the word septante for seventy, nonate for ninety in opposition to the soixante-dix (literally „sixty-ten“) and quatre-vingt-dix („four twenties-ten“) of the vigesimal French counting system. Also the definition of the meals are different: the word déjeuner is used for breakfast (that would be „lunch“ in French, which uses petit déjeuner for breakfast) and dîner for „lunch“ and souper for „dinner“ (in French these would be déjeuner and dîner respectively).

Instead of quatre-vingt („four twenties“ for „eighty“), used in French and Belgian French, the Swiss French uses huitante, especially in the cantons of Vaud, Valais and Fribourg. When you look for a post office in France, you would ask for a boite postale (BP), whereas in Switzerland, you would ask for a case postale (CP)…

In Switzerland, after the French Revolution,  people thought that children had to learn French and not Patois. Today, 90% of the Swiss French is the same in all the regions and only in one little village, Evolène in the canton of Valais, children still learn their Patois… (Important documentation for the Patois is the Glossaire des patois de la Suisse romande).