This is the first post of a series called „Switzerland“, where I will write about the multilinguality, interesting facts and habits of this country.

In the four national languages, Switzerland is called Schweiz (German), Suisse (French), Svizzera (Italian) and Svizra (Rumantsch). They all relate to the toponym Schwyz that has been first attested in 972 in Suittes (Old High German). Suittes is apparently related to suedan „to burn“ and refers to the area of forest that was burned and cleared to build (cfr. Room, Adrian. Placenames of the World. London: MacFarland and Co., Inc., 1997). Later on, this name was extended to the area dominated by the canton Schwyz and after the Swabian War of 1499, it was gradually used for the entire Confederatio Helvetica. Therefore, the German name of the country, Schwiiz, is a homophonous to the name of the canton and the settlement. Only the use of the definite article d’Schwiiz for the Confederation helps to distinguish it from Schwyz for the canton and the town.

The English name Switzerland is a compound, consisting of Switzer – „the Swiss“ – and –land: „the land of the Swiss“. The name Switzer comes from the Alemannic Schwiizer, the name of the inhabitants of Schwyz and his territory, and one of the cantons which formed the nucleus of the Old Swiss Confederacy.

The English name Swiss for the inhabitants of Switzerland, is loaned from the French Suisse (in use since the 16th century). – The name Switzerland itself is therefore a pars pro toto (“a part taken from the whole”) to the whole Confoederatio Helvetica.

The New Latin name of Confederatio Helvetica has been introduced gradually after the formation of the federal state in 1848 and derives from the name of the Helvetii, a Gaulish tribe living on the Swiss plateau before the Roman era. And this explains the abbreviation “CH”. 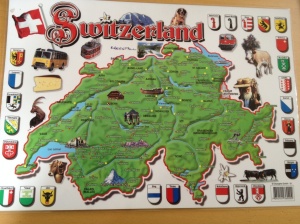